West Virginia University (WVU) is a public institution in Morgantown, West Virginia. It is part of the West Virginia Higher Education Policy Commission and was established in 1867. WVU started as the Agricultural College of West Virginia. However, it quickly began expanding its range of programs beyond agriculture. By the 1970s, the student population had exceeded 22,000 students. Over the years, the campus has grown to accommodate the increased demand. The Morgantown campus includes three sub-campuses. The downtown campus includes many buildings from the early days of the university, including eight buildings that are on the National Register of Historic Places. WVU is now organized into 15 different degree-granting schools and colleges, including the WVU School of Nursing.

The WVU School of Nursing offers several nursing programs, including programs for traditional BSN, RN to BSN, and accelerated BSN. They also offer graduate-level programs such as MSN, RN to MSN, DNP, and Ph.D. programs. All programs are accredited by the CCNE. The traditional BSN program includes training at two state-of-the-art simulation centers and through clinical experiences at nearby healthcare facilities. Students may also participate in the WVU Health Sciences Student Computer Program, which provides students with laptops that they may use through graduation.

In 2017-2018 academic year, 93% of West Virginia University's students received financial aid. Below is the breakdown of the financial aid provided to students. 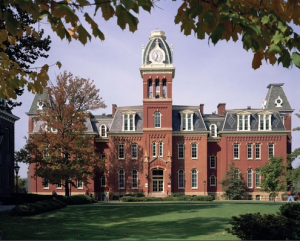