Villanova University is a private institution in Villanova, Pennsylvania. The Order of Saint Augustine founded the university in 1842. It maintains its affiliation with the Roman Catholic Church and is a member of the Augustinian Secondary Education Association. The university was an all-male institution until 1918. The college began offering evening classes for nuns. However, it was not until 1953 that the college became fully coeducational. The campus covers 254 acres about 12 miles from Center City. The campus is known for its greenery, as it includes over 1,500 trees, but it is not considered an official arboretum.

Several undergraduate and graduate nursing programs are offered at the M. Louise Fitzpatrick College of Nursing. The undergraduate options include traditional BSN, accelerated BSN, and RN to BSN. Graduate programs include MSN, Ph.D., and BSN to Ph.D. programs. All programs are accredited by the CCNE. With the RN to BSN program, registered nurses may complete their BSN studies in two years. The traditional BSN program is a four-year program that also presents students with the chance to study abroad. Students may choose to complete their sophomore year studying at the University of Manchester in England. The university also offers several study-abroad programs during the summer.

In 2017-2018 academic year, 64% of Villanova University's students received financial aid. Below is the breakdown of the financial aid provided to students. 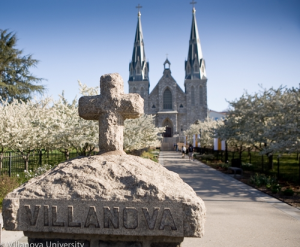