Seton Hall University was founded in 1856 in South Orange, New Jersey. It is a private institution with both undergraduate and graduate-level programs. Seton Hall University is a Roman Catholic university that consists of 11 different colleges and schools. The university has received several awards and recognitions, including ranking as one of the top five private universities for undergraduate internships. The main campus is on 58 acres of land and houses 9 of the 11 schools and colleges. Several of the main administrative buildings were built in the 19th century after the college moved from its original location in Madison to South Orange.

The Seton Hall University College of Nursing was founded in 1937. The school offers seven different nursing programs. The prelicensure nursing programs include the standard BSN program, along with accelerated BSN and RN to BSN programs. The traditional BSN program is a four-year program that includes hands-on learning and clinical practice at simulation labs and local clinics. The graduate programs include MSN, accelerated MSN, DNP, and PhD options. All programs are accredited by the CCNE. The baccalaureate programs and master’s program are also accredited by the ACEN. The nursing college was ranked as one of the top 100 graduate nursing programs in the country.

In 2017-2018 academic year, 100% of Seton Hall University's students received financial aid. Below is the breakdown of the financial aid provided to students. 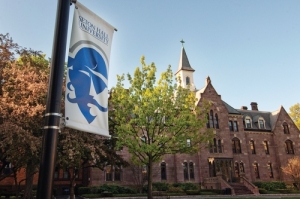