Regis College was founded in 1927 as a private institution. It is located in Weston, Massachusetts. It was originally founded as a women’s college and became co-educational in 2007, making it the last women’s college in Boston to start admitting male students. In recent years, the school has been recognized as one of the top regional schools in the Northeast. Regis College also offers an accredited kindergarten and preschool program at the Children’s Center where they teach children about science, technology, engineering, and math. The college offers over 39 areas of study and is known throughout the region for its nursing programs. The Regis College School of Nursing offers a variety of undergraduate and graduate nursing programs, including an online-only MSN program.

For those just getting into nursing, the college offers the traditional BSN program. There are also accelerated BSN and accelerated MSN programs, along with MSN, RN to MSN, and DNP programs. All programs are accredited by the ACEN, with the baccalaureate programs receiving accreditation in 1989. The accelerated BSN program is designed to be completed in just 16 months for students that already have a bachelor’s degree in a separate field of study. With the accelerated or traditional BSN programs, students also receive hands-on training through clinical placements throughout downtown Boston and the neighboring region.

In 2017-2018 academic year, 100% of Regis College's students received financial aid. Below is the breakdown of the financial aid provided to students. 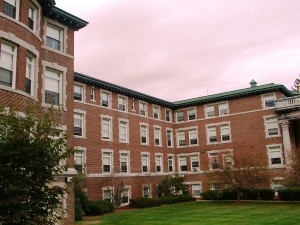