Pennsylvania State University-Penn State Harrisburg is one of 24 campuses operated by Penn State. It is a public institution in Middletown, Pennsylvania. It was established in 1966 and originally only served juniors and seniors. In 2004, the Harrisburg location began accepting freshman and sophomores. Harrisburg is conveniently located about two hours from Baltimore, Philadelphia, and Washington, DC. There are currently 33 full baccalaureate programs offered at the Harrisburg campus. However, the college also offers courses for completing the freshman and sophomore years for over 160 different majors offered through the Penn State University system.

Three BSN programs are offered at the Harrisburg campus. However, they do not offer graduate degrees in nursing. The CCNE-accredited baccalaureate programs include traditional BSN, accelerated BSN, and RN to BSN. For the traditional BSN program, students must complete 120 credits. The RN to BSN and accelerated BSN programs can be completed more quickly, and all three options include clinical rotations. With the accelerated program, students with a bachelor’s degree in a non-nursing field may earn their BSN in 16 months. The clinical rotations are completed at nationally recognized facilities and healthcare groups in the region, including the Penn State Hershey Medical Center, the Pinnacle Health System, and the Holy Spirit Health System.

In 2017-2018 academic year, 60% of Pennsylvania State University-Penn State Harrisburg's students received financial aid. Below is the breakdown of the financial aid provided to students. 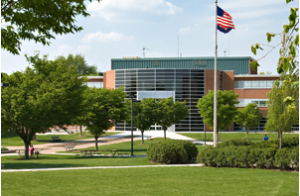