Northern Kentucky University (NKU) in Highland Heights, Kentucky is a public university with undergraduate and graduate degree programs. The university began as an extension campus in 1948 and became a four-year college in 1968. In 1976, the college received university status. Over the years, the average enrollment has steadily increased. NKU now enrolls over 14,000 students each school year and employs over 2,000 faculty and staff. The main campus is located on 400 acres of countryside near US Route 27, about seven miles southeast of Cincinnati. The university is structured into six colleges, including the College of Health Professions.

Students enrolled at NKU may choose BSN, accelerated BSN, RN to BSN, or LPN to BSN to earn their Bachelor of Science in Nursing degree. MSN and DNP programs are also available for students choosing to further their education. All nursing programs at NKU are accredited by the CCNE. Nursing students at NKU have access to the St. Elizabeth Healthcare Simulation Center, which includes seven simulation rooms. Other than the traditional BSN program, the nursing programs at NKU are also offered online. When enrolled in one of the on-campus BSN programs, students will be able to gain clinical experience at local hospitals after completing the first semester.

In 2017-2018 academic year, 96% of Northern Kentucky University's students received financial aid. Below is the breakdown of the financial aid provided to students. 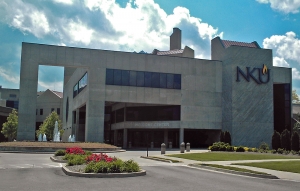