Linfield College-School of Nursing is a private institution in Portland, Oregon. It is part of Linfield College, which operates three campuses in the state. Linfield College was established in 1858 as a Christian school and received its current name in 1922. It is named after a Baptist minister whose widow donated a substantial sum to the college. The Portland campus is home to the School of Nursing, which was established in 1982. It is in the historic area of Northwest Portland, near the Legacy Good Samaritan Hospital and Medical Center. The Oregon State Board of Nursing and the CCNE have both accredited the nursing programs.

The School of Nursing offers three BSN programs, including traditional BSN, accelerated BSN, and RN to BSN programs. Students who already have a bachelor’s degree in a non-nursing field may enroll in the accelerated program, which is completed in 15 months. Registered nurses with an associate’s degree or diploma may enroll in the online RN to BSN program. The traditional program includes clinical rotations at local healthcare facilities. Students are also encouraged to participate in internships through partnerships with nearby clinics and hospitals. The traditional program also boasts small class sizes, with no more than eight students in clinical labs. 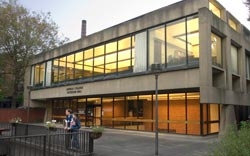