Cleveland State University is a public institution in Cleveland, Ohio. It was established in 1964 after purchasing the buildings of Fenn College. It also acquired the Cleveland-Marshall College of Law in 1969. It is now part of the University System of Ohio. Over 70 majors are available at the university, along with 27 master’s degree programs. These programs are offered through the nine colleges and five specialty-schools operated by the university, including the School of Nursing. The campus is the downtown Cleveland area. There is also a satellite campus in Westlake, which is part of the greater Cleveland area.

Students may enroll in undergrad or graduate nursing programs at CSU. These options include traditional BSN, RN to BSN, accelerated BSN, and MSN programs. All four options are accredited by the CCNE. The university has partnerships with several major healthcare centers in the area, including University Hospitals, the Cleveland Clinic, and MetroHealth. The university also has a high NCLEX-RN exam pass rate, with over 90% of students passing the first time they take the exam. Students who are interested in the traditional BSN program must complete prerequisite coursework, which includes anatomy, chemistry, microbiology, psychology, physiology, and several other required courses.

In 2017-2018 academic year, 89% of Cleveland State University's students received financial aid. Below is the breakdown of the financial aid provided to students. 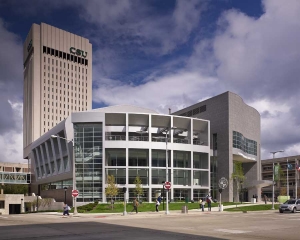