Belmont University is a private institution in Nashville, Tennessee. It offers both undergraduate and graduate degree programs. Belmont University was established in 1890 as the Belmont Seminary for Women. Classes were taught in the Belmont Mansion, which was built in 1850. The seminary merged with another seminary in 1913. The mansion is still owned by the university and open for tours. Belmont University is also home to the first radio station in Nashville.  The main campus includes an $18 million state-of-the-art facility called the Gordon E. Inman Center, which houses the College of Health Sciences and Nursing.

Four CCNE-accredited nursing programs are offered at Belmont University. These options include traditional BSN, RN to BSN, accelerated BSN, and MSN programs. Students with a bachelor’s degree with a non-nursing major have two options for earning their second degree. They can take the accelerated BSN program, which takes 16 months to complete. The university also offers a traditional program that lasts for 21 months. For students without a degree, the traditional BSN track is designed to be completed in four years. Students will complete some nursing courses during their freshman and sophomore years. However, most of the core nursing courses are offered during the final two years of the four-year program.

In 2017-2018 academic year, 93% of Belmont University's students received financial aid. Below is the breakdown of the financial aid provided to students. 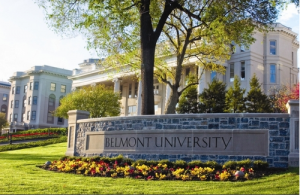