University of Louisiana at Lafayette

The University of Louisiana at Lafayette is a public university and part of the University of Louisiana System, along with nine other campuses throughout the state. It has the largest enrollment compared to the other campuses and the second largest student body in the state. The university was originally founded as an industrial school in 1898. The current name was adopted in 1999 after the school became a four-year university. It is now a national research university and is accredited by the Southern Association of Colleges and Schools. The university offers more than 80 undergrad programs and 27 master’s degree programs, including two nursing programs.

There are only two nursing programs available at the University of Louisiana at Lafayette Department of Nursing. Students may choose between the BSN and accelerated BSN program, which is accredited by the CCNE. The latest edition of the US News & World Report ranking of Best Colleges ranked the nursing department as one of the best in the country. Students must complete prerequisite courses, which are typically completed during the freshman year. While the university does not directly offer MSN or DNP programs, they do offer courses in these areas through an affiliation with the Intercollegiate Consortium for a Master of Science in Nursing (ICMSN).

In 2017-2018 academic year, 96% of University of Louisiana at Lafayette's students received financial aid. Below is the breakdown of the financial aid provided to students. 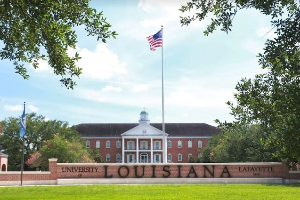