Saint Louis University is a private Roman Catholic university in Saint Louis, Missouri. The university was founded in 1818 as the Saint Louis Academy, making it the oldest university west of the Mississippi River. It is a member of the 28-institution Association of Jesuit Colleges and Universities and offers about 100 undergrad programs and 80 graduate-level programs. The campus includes 131 buildings spread across 235 acres. In the middle of the campus stands the Clock Tower, which was constructed in 1993. SLU is also the first American university to establish a campus in a European country, with the opening of a campus in Madrid, Spain.

The SLU School of Nursing offers eight different CCNE-accredited nursing programs, including three paths to earning a BSN. The BSN programs include the traditional BSN, accelerated BSN, and RN to BSN programs. Graduate programs include MSN, RN to MSN, accelerated MSN, DNP, and PhD programs. The BSN programs include practice labs to simulate real life medical situations. During the spring semester of the sophomore year, students begin placements at clinics in the area to receive clinical experience. In 2017, the BSN graduates had an NCLEX-RN pass rate of 94.4%, which is about seven percentage points higher than the national average.

In 2017-2018 academic year, 96% of Saint Louis University's students received financial aid. Below is the breakdown of the financial aid provided to students. 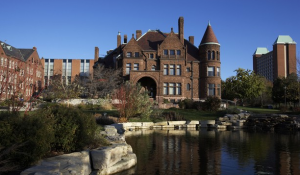