Queens University of Charlotte is a private university in Charlotte, North Carolina. The university was established in 1857. It was originally called the Charlotte Female Institute. The institute merged with the Presbyterian Female College in 1912 to become Queens College. It received university status in 2002 and now offers over 34 undergraduate majors and 10 graduate degree programs. The university is affiliated with the Presbyterian Church and serves close to 2,000 students per year. Queens University manages several colleges and schools, including the Blair College of Health, which houses the Presbyterian School of Nursing, the Kinesiology Department, and the Human Service Studies Department.

Nursing programs available at the university include traditional BSN, accelerated BSN, and RN to BSN programs. Graduate-level programs include MSN and RN to MSN programs. All programs are accredited by the CCNE. At the Presbyterian School of Nursing, the RN to BSN program is offered online, while the accelerated and traditional programs require on-campus learning. Incoming freshman who are interested in the traditional BSN program must first enroll as a general student. During the second semester of their sophomore year, students can apply to join the nursing program. Clinical rotations are completed through partnerships with nearby healthcare agencies.

In 2017-2018 academic year, 98% of Queens University of Charlotte's students received financial aid. Below is the breakdown of the financial aid provided to students. 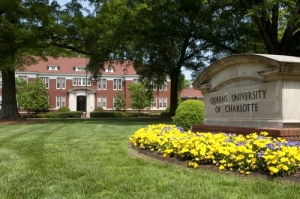