Oregon Health & Science University is a public institution. The campus is in Portland, Oregon. It was established in 1887 as the University of Oregon Medical Department. In 1974, it became an independent institution and took its current name in 2001. The university maintains several partnership programs in the area, including a partnership with PharmD Pharmacy. While the university is now independent, it is still associated with the two hospitals on the campus. These hospitals include the University Hospital and the Doernbecher Children’s Hospital. A third hospital is next to the campus, ensuring that students have plenty of access to hands-on clinical training.

The university offers several undergraduate and graduate-level nursing programs. The undergrad programs include BSN, RN to BSN, and accelerated BSN. Graduate programs include MSN, DNP, BSN to DNP, and PhD. These programs are accredited by the CCNE. The accelerated BSN program is designed to be completed in 15 months. Students enrolling in the accelerated program must already have a bachelor’s degree with a non-nursing major. After earning their BSN, they can transition directly to the PhD or DNP program. With the traditional BSN program, students must complete clinical experiences at local public health facilities, including hospitals and outpatient clinics. 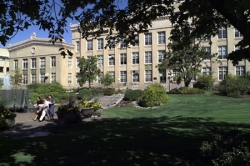