Baylor University (BU) is a private Baptist university in Waco, Texas. It was chartered in 1845 by the Republic of Texas, making it one of the oldest universities in Texas and one of the first institutions west of the Mississippi River. It is located near the Brazos River and includes a 1,000-acre campus. It is the largest Baptist university campus. The university is structured into twelve different colleges and schools, including the Louise Herrington School of Nursing. BU has received recognition for its academic programs, including ranking second in the nation for marketing programs. It was also tied for 71st-best national universities according to a 2017 ranking from US News & World Report.

The BU Louise Herrington School of Nursing offers traditional BSN, accelerated BSN, MSN, DNP, and BSN to DNP nursing programs. These programs are all accredited by the CCNE. With the traditional BSN program, students may complete their prerequisite courses at any of the Baylor University campuses. However, the final two years are completed at the Waco campus and include clinical rotations and lab experiences. The accelerated BSN program also offers clinical and lab experiences, along with hybrid learning. Accelerated BSN students will complete classes online and on campus.

In 2017-2018 academic year, 98% of Baylor University's students received financial aid. Below is the breakdown of the financial aid provided to students. 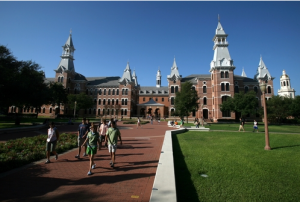