Soldiers were not the only heroes of the First World War, there were hundreds of inspirational women truly devoted to their cause…not the taking of lives, but the saving of lives – the brave nurses of World War I.

Between the years of 1914 and 1919, war raged throughout the world, resulting in over 37 million casualties – 20 million of which were wounded and an estimated 17 million killed. It was one of the deadliest wars is human history, yet there were some brave women who risked becoming one of these casualties, to help preserve and save human life. Nurses throughout the First World War, eased the pain, and treat the wounds of a constant stream of soldiers as bombs exploded around them, with enemy fire never to far away.

These women not only overcame barrages of enemy fire and the threat of capture, but also great prejudice to give their service to their country and the soldiers who fought for them. These are some of the most heroic and inspirational nurses of WWI.

There may not be another nurse who was as dedicated to her cause than British nurse Edith Cavell, in fact she died for it. She was so dedicated to her profession that she would help any soldier that was wounded, no matter their nationality. 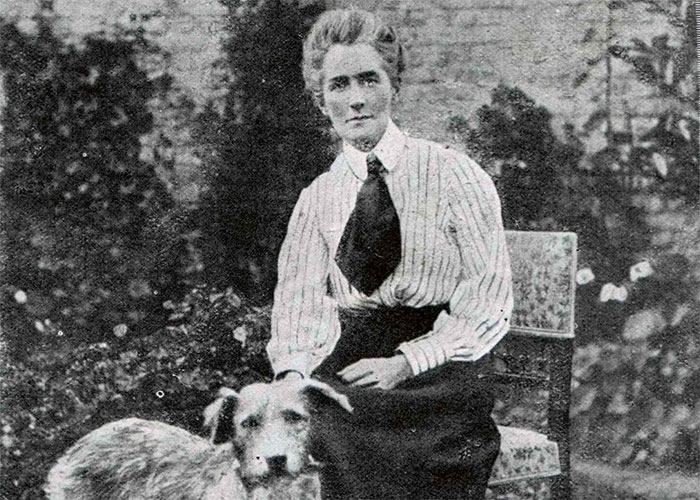 She also has been credited with helping around 200 Allied soldiers escape the German-occupied Belgium throughout the war. Cavell left her post with the British Secret Intelligence Service, to sneak inured Allied soldiers out of Belgium, giving them fake identification and a place to hide until they could reach the Dutch border.

Sadly, in August of 1915, Gaston Quien, her German collaborator, betrayed her and she was arrested for treason, to be sentenced to death at a court martial. She was executed by firing squad on October 12th 1915. She was gracious right up until her death, forgiving her executioners saying shortly before her death: “…I realize that patriotism is not enough, I must have no hatred or bitterness towards anyone.”

Sharing a love of motorbikes and a strong calling to nursing, Mairi Chishom and Elsie Knocker started their wartime work in Belgium in the Flying Ambulance Corps, transporting wounded soldiers to a field hospital in Furnes. But, also being tasked with taking the bodies of fallen soldiers to the mortuary, the women soon became saddened the amount of men they were losing. 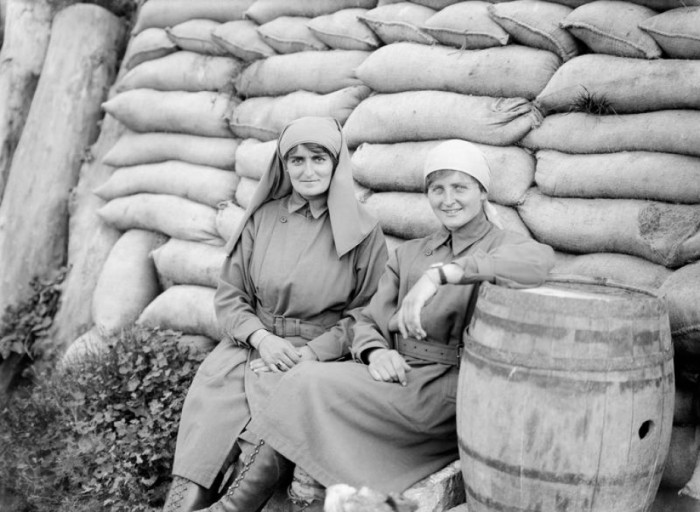 Mairi Chisholm and Elsie Knocker outside their sandbagged third ‘poste’ in Pervyse, September 1917

This led the women to leave their official post and to set up an illegal dressing station, just 100 yards from the hellish trenches, in an abandoned cellar in Pervyse. Since they were not nursing in an official capacity, they had to source their own support and supplies. Thanks to their dedication, the two nurses were seconded by Belgian troops stationed nearby, and went on to save many more lives throughout the war, some that would have surely died otherwise. Mairi Chisholm’s heroism was recognized with the Belgian Order.

Unlike Chisholm and Cavell, there were some nursing heroes that remained unsung, until long after their deaths. Linnie Leckrone, wasn’t formally recognized for her brave service until 2007, when she was awarded the Silver Star, which is the US military’s third highest award for valorous. She was awarded the Citation Star during her service, but was discharged before she received it, and never even knew about it. She returned home after 14 months of long service, but there was no ceremony or welcome. 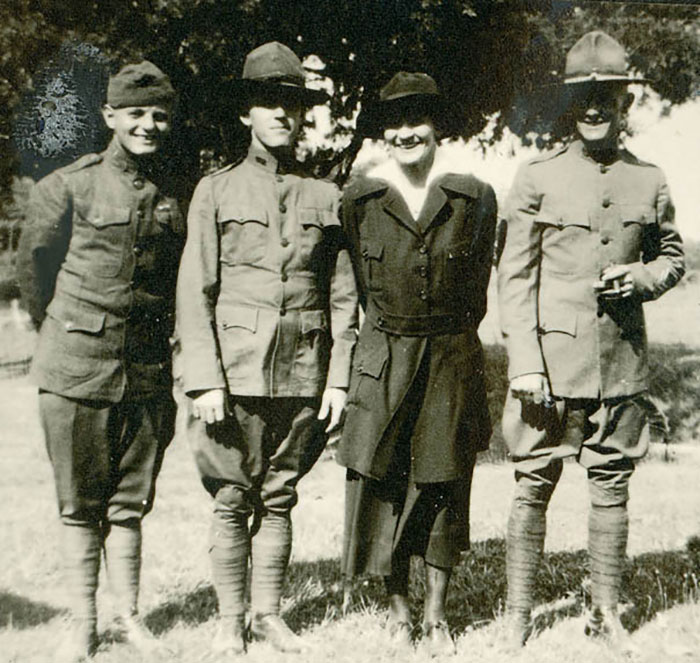 Linnie Leckrone standing with her brothers, who also served in the war (source)

The Silver Star was an award that was well deserved for Linnie, who volunteered for duty on the front line in France, as part of a small ‘gas and shock team’. The enemy fire as extensive and the barrage of wounded would have been overwhelming for so many, but for Linnie Leckrone, her thoughts were always only on the welfare of the troops.

Her daughter Mary Jane Bolles Reed said of her mother: “…you don’t need to know what she did, but it was how she did those things…with compassion, and gumption and care – with the heart of a true nurse. Linnie Leckrone was a nurse all her life. She was unflappable.”

She was born to an aristocratic family, certain to live a live of great wealth and privilege, but Dorothy Fielding left all of that behind to help the troops when the war came. She became a volunteer ambulance driver in Belgium, never loosing her spirit, despite facing the immense pressure of driving under enemy fire. 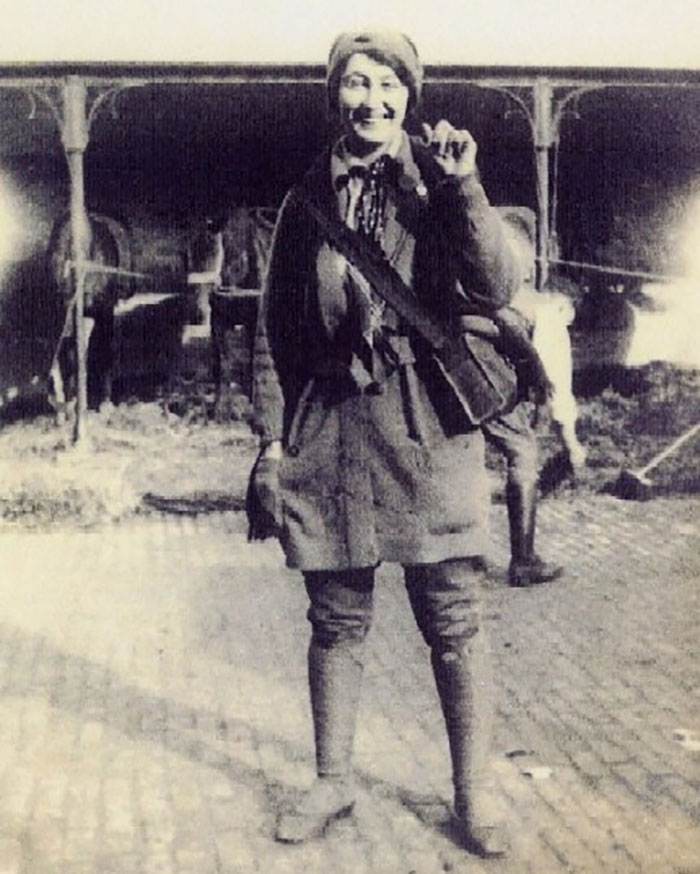 Feilding outside stables, Furnes (circa 1916) (source)

No not only kept her own spirits up, but those of others too, by hosting tea parting in among the ruins of Furnes. Her dedication and bravery earned her the Belgian Order of Leopold II Knights Cross, the English Military Medal for Bravery and a Bronze Star (French Croix de guerre).

A real trailblazer for nurses and women in the military, Julia Stimson had a long history in nursing before her involvement in World War I. Stimson led the nurses of Base Hospital #21 to Rouen France in 1917, and impressed so much with her dedication that she went on to become the chief nurse for American Red Cross Nursing in Paris, and then director of nursing for the American Expeditionary Forces in Tours, France. 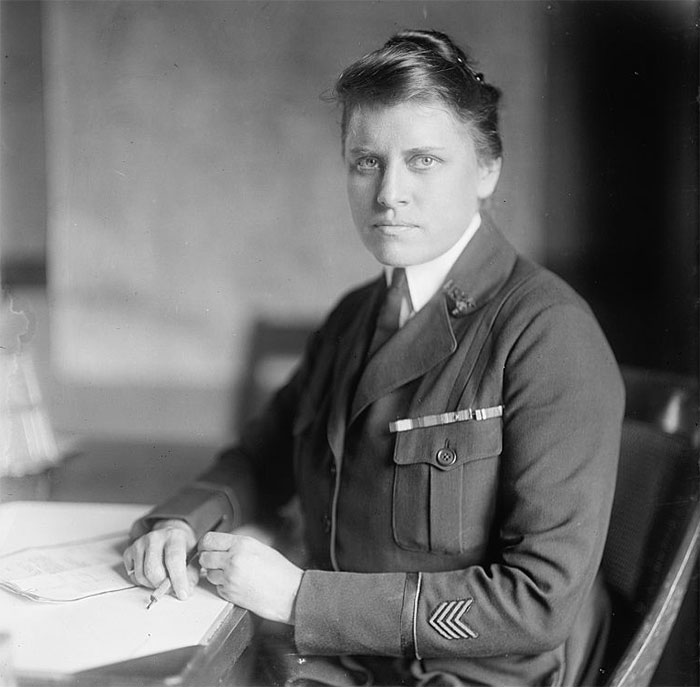 She may not have spent all of her time throughout the war serving on the front line, but she still contributed to the medical care of thousands of soldiers through her vital administrative roles. Her contribution was acknowledged by many allied nations receiving the Distinguished Service Medal from the United States, the British Royal Red Cross, the International Red Cross Florence Nightingale Medal,  1st Class; the French Medaille de la Reconnaissance Francaise; and the Medaille d’Honneur de l’Hygiene Publique.

Her dedication to nursing did not end after the war. She continued to serve as a nurse within a military capacity, becoming superintendent of the Army Nurse Corps in December of 1919.

She paved the way for women in the military becoming the first ever woman to attain the rank of Major in the U.S. Army. She retired from the army after two decades of service in 1937, but continued to dedicate her life to nursing, becoming president of the American Nurses’ Association in 1938 until 1944. Upon the adent of the Second World War, she helped to recruit new nurses for the war effort – a real nursing hero.

Patricia has been a Registered Nurse for almost forty years in a wide variety of settings. As a Registered Nurse, she realized that conventional healthcare was not meeting the needs of all patients. She became an herbalist and obtained a PhD in Natural Health. Patricia is a professional member of the American Herbalist’s Guild, passing the stringent peer reviewed process to become a Registered Herbalist.